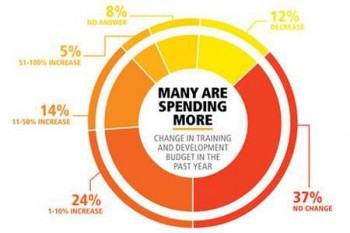 Entrepreneur PJ Ferguson is looking to turn her small business into a mid-sized business and, eventually, to step away from day-to-day operations. But to do that, she’s going to need middle managers who can step up to greater responsibility. That’s why, almost three years ago, the president and owner of ABL Employment Inc., a temp agency operating mainly in southern Ontario, decided to make a serious commitment to training and development.

Ferguson and her company (which has appeared on the PROFIT W100 and PROFIT 200 rankings in the past) started by creating a training and development department and hiring a manager to oversee all training programs. The manager immediately instituted a seven-week apprenticeship program for new employees. Now, ABL is planning to take the next step by sending staff to management courses.

The firm’s annual training costs have jumped from a negligible $2,000 or so a few years back to about $150,000 in 2012. But Ferguson is confident that her recent investments will pay big dividends down the road. “You can grow only as quickly as the people you have,” she says.

As the economic picture brightens, companies are adopting a renewed focus on grooming the talent needed to capitalize on growth potential. After all, employees who lack the opportunity for advancement naturally start to look around for better prospects. That makes retention, training and professional development higher priorities for SMEs. But they’re not investing in all three to the same degree—a potentially risky oversight.

Training and development is the focus of the most recent American Express Small Business Monitor, a quarterly survey co-produced by PROFIT and Amex. Conducted in April, the poll surveyed 500 Canadian business owners with two to 100 employees, gauging their confidence levels and investigating best practices for training and development. (Results are considered accurate within 4.3 percentage points, 19 times out of 20.)

Entrepreneurs reported improving business conditions and confidence levels heading into the second quarter. (See “Widening Smiles”.) Amid this growing optimism about the prospects for their businesses, most respondents are planning to boost their spending on training and development. Small-business owners—who already spend around $1 on training for every $12 in revenue— now plan to increase those budgets by an average of a substantial 7.5% over the next two years.

They are not, however, planning to spread those larger budgets around evenly. When asked which areas and methods of training and development they prefer—that is, those that provide the best return on investment (ROI) and the highest level of satisfaction with results—there was a clear consensus. The majority of respondents chose low-cost, in-house training that is job-specific, as opposed to external training that focuses on more general skills.

The 8 Subjects delivering the best return on investment

HOW TO TEACH IT

The 8 teaching methods delivering the best return on investment

* Among those who have used this method of training and development

Given the satisfaction that entrepreneurs report with job-specific training, it’s easy to conclude that external training and development (such as seminars, course work, conferences and web-based programs) are a poor use of money. But it’s not that simple.

Athena Varmazis, vice-president of small business services for American Express Canada, says that small businesses need to understand the distinction between “training” and “development.” While the two terms tend to be lumped into a single category, they’re actually quite different—like the opposite ends of the same spectrum.

Training, says Varmazis, is the transfer of specific, job-related skills from a senior employee to a junior employee. This kind of skills acquisition costs little, provides direct benefits to the company and is available even to the smallest firm. No surprise, then, that small-business owners report high ROI at this end of the spectrum.

Professional development is something else entirely: the transfer of widely applicable skills, often from an outside source, which allow employees to advance in their careers. These types of programs cost more and deliver skills that employees can take with them when they leave, often to a competitor. This results in a less tangible and riskier ROI proposition, but one that, Varmazis says, should not be ignored.

Take Ferguson’s situation at London, Ont.-based ABL Employment. Her company, founded in 1999, has always offered on-the-job training. But as the number of employees at ABL doubled to 28 over the past seven years, the need for good middle managers grew. That led to the development of a management-training program with both internal and external components. As part of that program, employees complete education modules and readings, and attend seminars. The company even has started looking into providing management coaching.

Training and development spending as a share of revenue

Ferguson agrees that professional development offers a less tangible ROI, but, she says, companies that neglect these kinds of programs are limiting their expansion prospects. “If you don’t do that, you are not positioned for growth,” she says. “In terms of dollar value, it might be harder to measure. But in terms of reaching the goals of my company, the development side is far more crucial than basic skills training.”

Other PROFIT Leaders—respondents who run companies that have ranked on the PROFIT 200, PROFIT HOT 50 and/or PROFIT W100—seem to agree with Ferguson. Like other survey respondents, PROFIT Leaders place more emphasis on on-the-job skills training than on professional development. However, the Leaders were far more likely to provide development training in addition to on-the-job skills training.

Still, not every business has a need for external professional development. At Elite Moving Inc.—a relocation company with eight employees based in Grande Prairie, Alta. that has appeared on the PROFIT HOT 50— there’s not much high-level learning required, says president Jean Cottrell. “My crew are not rocket scientists, and they’re not stupid, either,” she adds. “But they’re usually hands-on learners. They don’t have to study from a book.”

Motives for offering training also can vary dramatically from company to company. The largest group of respondents, at 36%, cited a desire for “improved competitiveness” as their primary motive. Another 26% cited “employee retention,” while 14% were concerned about “keeping up with new technology.”

The impact of disruptive technology on a small business can be significant. At West Central Heavy Duty Repair Ltd., which repairs vehicles, agricultural machinery and heavy construction equipment, engine work looks increasingly like computer science, says president Wayne Lewis. In his Spruce View, Alta.-based shop, he keeps four laptops that are constantly being hooked up to various vehicle components—such as engines, transmissions and braking systems—in order to diagnose problems.

Each component comes with its own software, which means that when Lewis buys a new component, he also has to buy the software that comes with it, as well as the program to train his employees in how to use the software. One of his major suppliers, for instance, offers training classes more than 1,000 kilometres away in Portland, Ore. But Lewis has managed to avoid the cost of sending his employees such a long distance by taking advantage of web based training programs. “That way, I don’t lose any people,” he says.

In the construction industry, meanwhile, the challenge lies in the numerous certifications that tradespeople require for a variety of tasks. Neal Pope, who owns NPC Services in Campbellcroft, Ont., runs through a list of them: licences for driving forklifts or working on elevated platforms; certificates for safety, concrete work, scaffolding, working in harnesses, and more; and the intensive apprenticeship program that’s required for each trade.

All that training can become expensive. So, it’s not surprising that more respondents (31%) cited budgetary constraints than any other reason for not investing more in training and development. But while small-business owners may not be able to afford the kinds of sophisticated development programs that are offered by large corporations, Varmazis says, there are ways that SMEs can stretch their dollars.

One tactic used by Lynn McGregor, president of McGregor Design Group, a Toronto-based workspace-design consultancy, is to reward star employees by sending them to a program or conference—but with one condition : the employee must share the resulting training in a presentation to other staff. “That forces them to absorb and take notes,” says McGregor.

Neither is she shy about demanding that her staff cover some of the costs of programs themselves. Only 19% of Amex Monitor respondents require that employees contribute to the costs of development training— a statistic that McGregor believes is indicative of a frustrating culture of entitlement, especially in the professional ranks.

“I’ve actually had people ask me to pay their dues for membership in the professional association,” she says. “Well, what good are you to me if I have to pay for all those things? My part is to compensate you for those skill sets once you have them. But I shouldn’t have to pay you to get those skill sets, and then pay you more for them. That’s just too easy.”

An investment in training benefits the employer—but it’s worth reminding employees that they benefit, too.