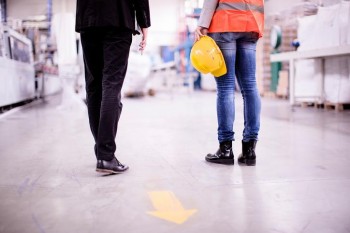 Bad as the economy gets, there are still lots of companies out there producing widgets.

They may not make as many widgets as they once did, and their widget profit margins may have dipped, but they’re still cranking out widgets.

And if you’re making widgets, you need people on the shop floor who know how to work widget-making machinery. Those aren’t skills everyone has, after all.

The London operation is part of a larger ABL group created by Ferguson’s sister, P.J., 10 years ago. She owns ABL offices in Burlington, Hamilton, Brampton and North York. Originally, Ferguson’s involvement was limited to the London office, but more recently she has joined her sister in the overall business and they now own it together.

Last year, the business generated revenue of $8.5 million across all locations, enough to place it 42nd on Profit Magazine’s list of Canada’s top 100 women entrepreneurs in 2008. That represented three-year revenue growth of 100% — not bad for two sisters with 13 full-time employees and several hundred assignment employees.

Ferguson, 47, has some entrepreneurial blood in her veins. Her parents created Voyageur Transportation, a business brother Perry now runs. In the last two decades, it has grown from 50 employees to more than 600 across four divisions.

“I always knew I wanted to run a business of some kind and after seeing what my sister was doing, I decided it was a great opportunity to do something here in London,” Ferguson says. Getting started required more than just putting out an ABL sign and rounding up some customers.

Though it does fill some office jobs, ABL focuses primarily on general labour and factory jobs. To get started, Ferguson had to find and register scores of potential workers, known as assignment employees.

“We meet and talk about their skills and what type of job they’re looking for. Our ultimate goal is to help people move toward long-term work, so we’re trying to find a position that fits them. We want to set them up for success.”

It takes a while to build up a roster of workers large enough to satisfy the needs of large clients, but over the last few years  that’s exactly what Ferguson has done. With a staff of three, working from a downtown office — she moved the business out of her home after eight months — she fills positions every week for companies across Southwestern Ontario.

The companies looking for workers pay ABL, and ABL pays its assignment employees, taking a percentage of the payment to cover its costs.

The job can be hectic, depending on the time of year and demand for workers.

“The fourth quarter seems to be the busiest every year,” she says. “My cellphone  is on 24/7 and I always answer it.

“We get calls late at night looking for workers the next day. Sometimes a worker wakes up sick and calls for a replacement. Sometimes, they get to the job first thing in the morning,  and have no idea what door to go in or where to report. We help with all of that.”